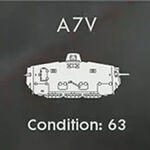 Designed by the Allgemeines Kriegsdepartement, 7. Abteilung, Verkehrswesen, the A7V was the only tank designed by the German Empire and deployed during the war. Only twenty were produced and made a very modest contribution to the Great War, as their boxy design was cumbersome and ill-suited for the ravaged terrain of First World War battlefields.

In Battlefield, however, the Sturmpanzerwagen lives up to its name, offering a forward-mounted 57mm tank gun and six 7.9mm machine guns to deter infantry. Although historically it was extremely slow, barely reaching speeds of over 4 mph cross country, it's fairly nimble for a tank of its size.